A QUICK GUIDE FOR GETTING STARTED WITH REALITY KIT

Apple announced a new framework at WWDC2019 called Reality Kit which makes it much easier for building Augmented Reality apps in iOS13.

What you need to get started: 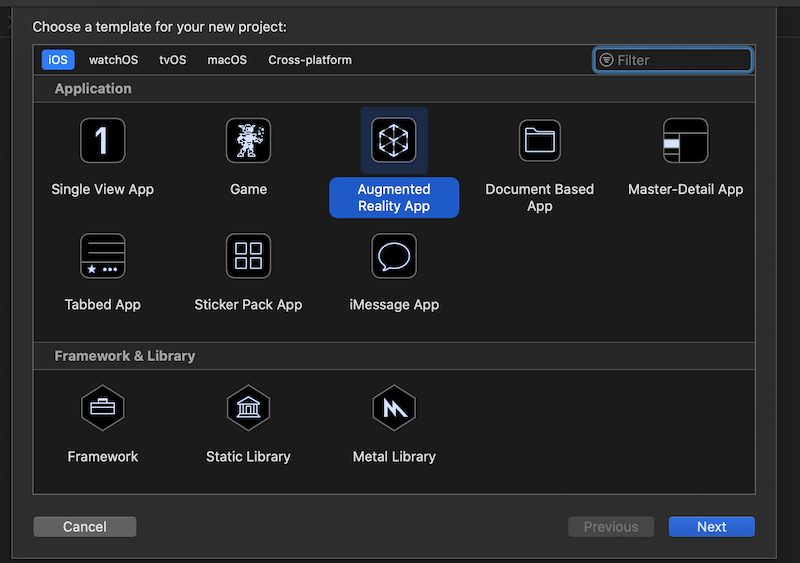 We want to achieve 4 main things in this tutorial

1. Anchor a custom usdz animation file into our App on a horizontal surface
2. Setup behaviours action sequence for playing usdz animation audio files
3. Add tap gesture in our App, so we can control simple behaviours
4. Launch our App and test it on iOS13 or iPADOS device.

In Xcode we will only need to work with three areas I’ve circled in Red. 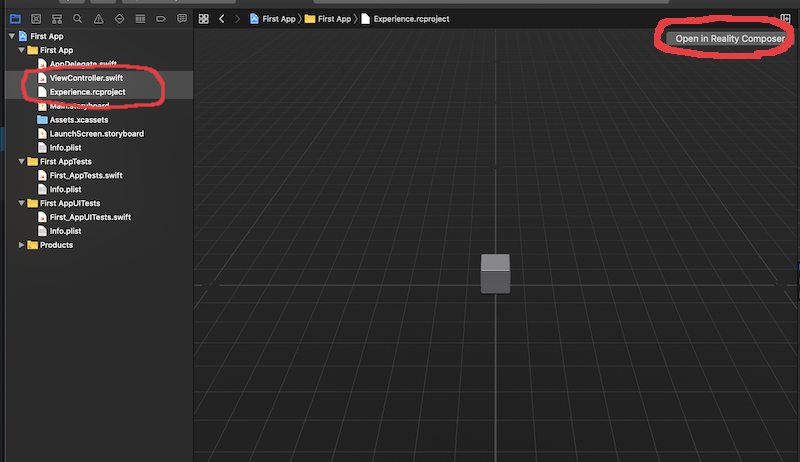 Let’s first look at ViewController.swift which adds our box to the AR View on our device.

Without any changes if you attach your iOS13 device to your Mac, and build the project to the target device. The app will insert the basic primitive cube into the AR View inside your room. However, it is just a boring cube! Therefore, to make it more interesting… I want to show you how to import a custom usdz file with animation into Reality Composer and setup an audio sound effect, some physics forces on a ball and control everything with a tap gesture.

For this example we’ll use the cannon firing animation & “BANG” signage for our custom usdz. Click on each image to go to download page. 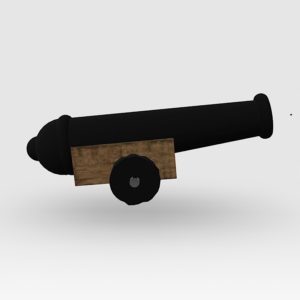 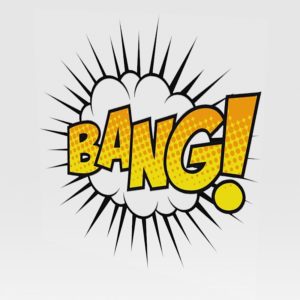 Download button is located on the right sidebar (circled in red below). 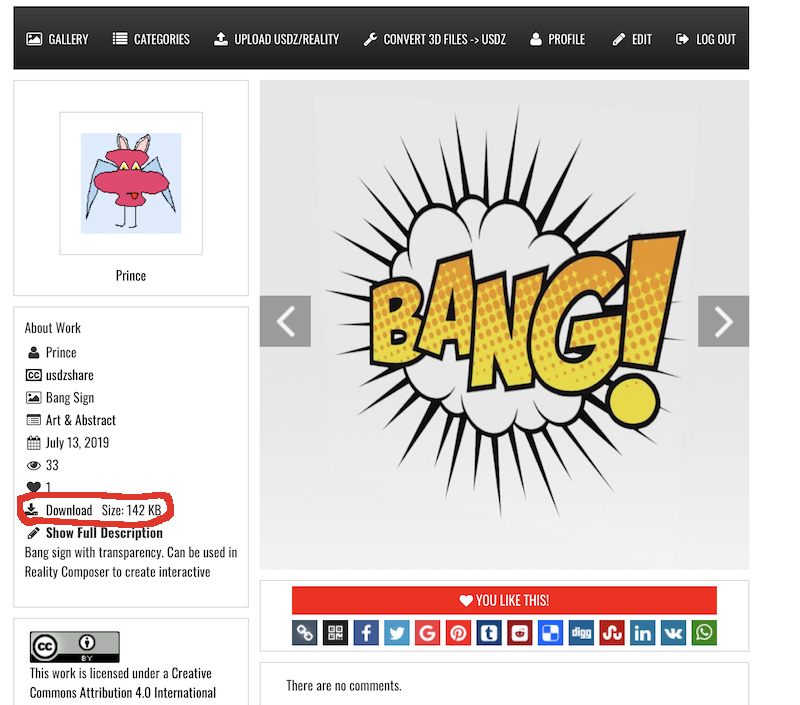 After downloading the two usdz files. Go back into Xcode and click on the Experience.rcproject file in our Xcode project (left sidebar) and Open
Reality Composer inside Xcode (top right header bar).

Once inside Reality Composer – delete the cube by clicking on it with right click on the mouse. Then, click on the Objects + button at the top and import the two custom usdz files. 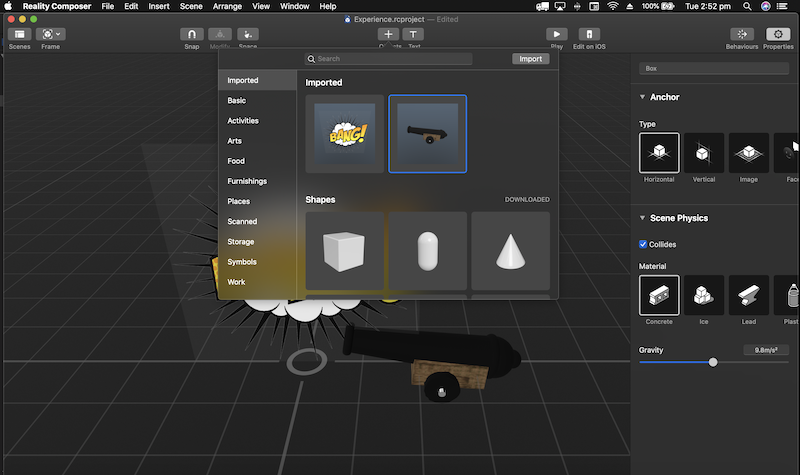 Now by exiting Reality Composer and going into Xcode will update the AR scene inside Xcode. But we won’t do that yet. Let’s quickly set up the rest of the scene to fire the cannon with sound effects and cannon ball. 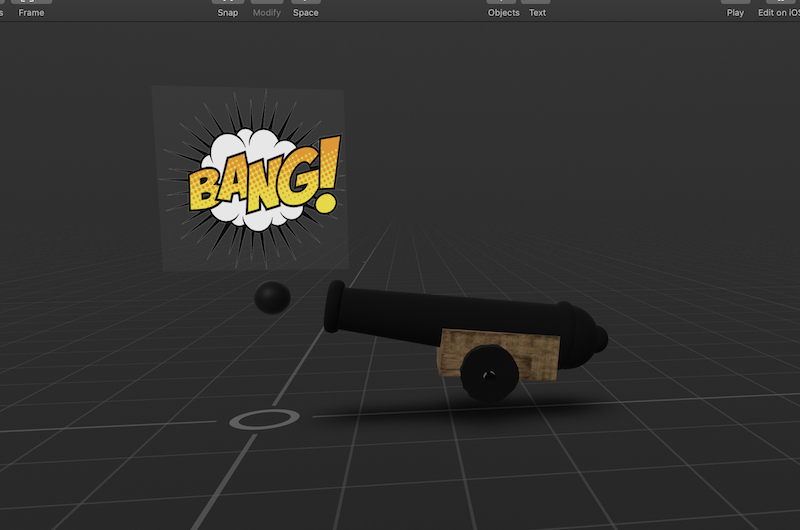 You scale and position the scene to look like this.

Next, click on Behaviours tab on the top left corner of Reality Composer. Then click the “+” button and add a “Start Hidden” behaviour followed by a “Custom” behaviour. Next we will add action sequences to each. First sequence is easy. Just select the cannon ball & bang sign as those objects are hidden at the start of the scene and won’t appear until we tap the cannon. 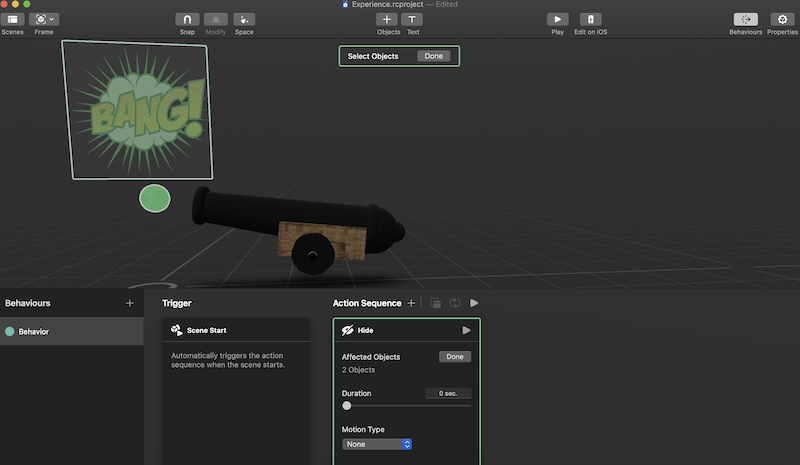 The second sequence is more complicated. It is a custom sequence with several actions. 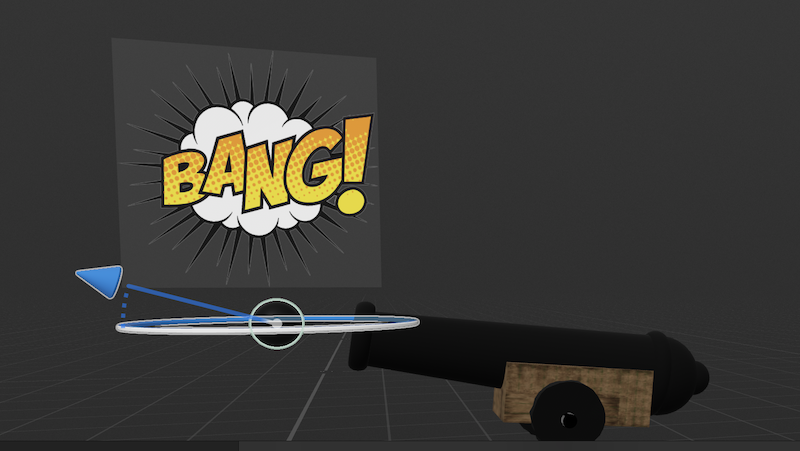 make sure the force on cannon ball is pointing in the right direction!

All these actions should be merged by dragging each action onto the first action in the sequence. By merging them together, they will occur at the same time when the animation plays. 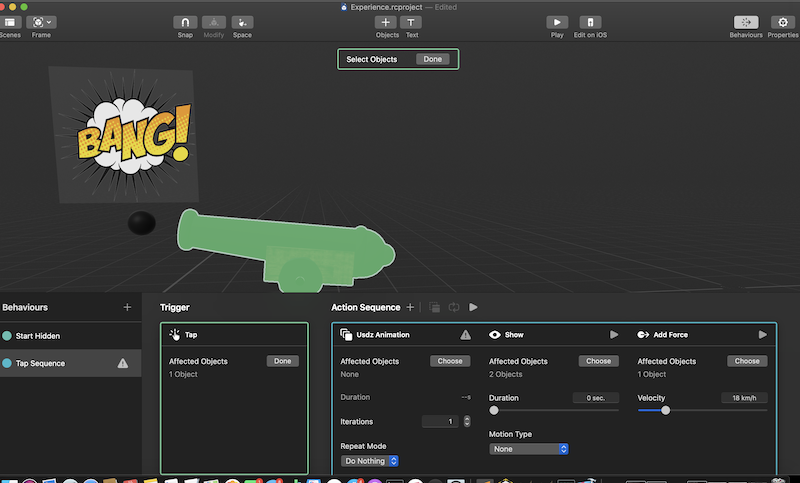 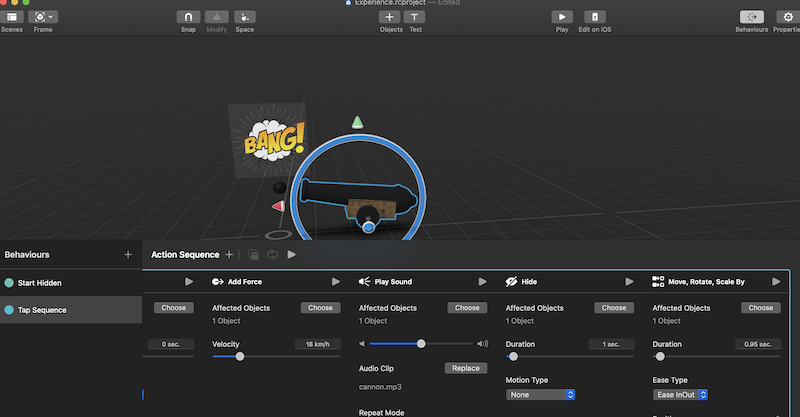 Note: One gotcha is objects are only clickable in Reality Click if it has collision body. In Reality Composer set the cannon to physics participate – as fixed. 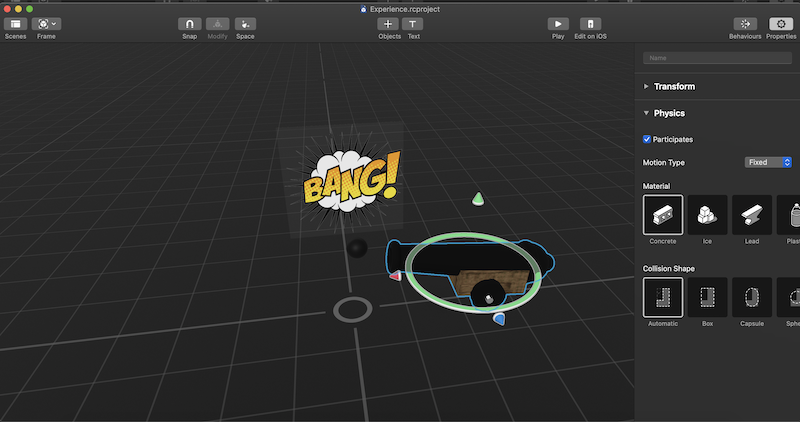 Make sure the cannon is setup with physics – fixed. Otherwise it won’t be tappable in Reality Kit

Now we can test our scene inside Reality Composer by selecting the “Play” button on the top right header. Play the scene and make sure it seems like its working as expected.

We can now close Reality Composer go back into Xcode and the new scene with all the behaviours setup should be ready in the Xcode scene view.

Now we have to setup a tap gesture in ViewController.swift so that when our AR scene loads in the room it plays the animation as expected. Replace the ViewController.swift code with the following code snippet. Then attached your iOS13 or iPadOS device and build and run app. Once the cannon anchors on horizontal surface…tap on the cannon for the animation sequence to play.

Note: There is a bug with some mp3 audio files at the moment which can crash the app. So for testing purpose use this sound effect which works as expected explosion.mp3 – Hover over link & use the right-click button and select download file.

A quick screen capture of the demo iOS app the tutorial is based on. Note: some mp3 audio files crash the iOS app. So I included the audio file on the tutorial page as download link which shouldn’t crash the app. DM if you need help getting it working. pic.twitter.com/ZYsKKIOzEw

Next Tutorial => Occlusion in Reality Kit